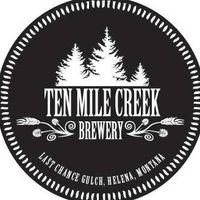 Over MacDonald Pass to Helena again! I'll be, as always, the guy at the end of the room supplying the sounds that make you wonder... "Um... is this still the same "song?" Perfect for your family beer experience, for sure!

Will warm things up in Libby's Living Room! 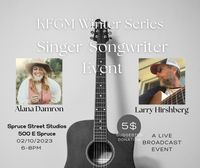 KFGM was super kind to invite me to play at this event. I'll do a 45-60 minute set, as will Alana Damron. Don't worry - I'll be looping and jamming, as always... so.... maybe 5 songs? Depends how much I talk! See you there. This'll be really fun!

Meanwhile, let's step back a bit to the summer of 2005. Some months after the dissolution of The Sleeman Gulch Blues Band, a couple of friends (Travis Yost and John Sporman) decided to give up their rhythm section roles in the Mike Bader Blues Band, and called me, suggesting I might enjoy the bass gig. I joined Mike, and played bass with him for maybe three years. Mike provided a LOT of gigs. For that I'm thankful. And through that gig, I met Brandon Zimmer, BZ, an awesome drummer and super guy. BZ is a character of a whole 'nuther kind. I've had some great times playing and travelling with young BZ. And from those times grew Certain Molecules, an improvising project that led to an interesting, self-titled recording. We recorded sporadically through 2007, and the disc was done by December '07, and released in the spring of '08. There are guests on there, and a whole lot of out-there music. It's a mind-expansion thing.

Oh, and did I mention that my wife Debbie and I had a baby girl at the end of November, 2007? Thanks for sticking with me here - I'll be back from time to time with updates. LH

(At this point in the bio, the subject/author takes a break. From here on out, updates are noted, and sporadically added)

WHOA! It's now November 2012 and I'm back with more of the bio! Holy cow, having a kid really cuts into one's bio-updating time. Among other things. Anyway...The Mike Bader thing ended for me sometime around the fall of 2008. After that it's been solo acoustic performances, lots of them, and raising up my daughter. I've continued writing and recording, and have put out two more song-based records, Box Elder, released at the start of 2009, and The Rise and Fall of Maple Bar Mountain, which came out in 2011.
Also, Certain Molecules hit the studio again and came out after a year with an incredibly dense, exploratory record called intratomic. BZ and I are so happy with this record, that as of this writing, we are planning to expand the project, start rehearsing and see about bringing Certain Molecules to the stage from time to time. It's a big step for us, but we think it'll be fun and interesting. In summation: Had a kid, wrote, recorded, played lots of singer/songwriter solo gigs. Got older.

It is now 2018. There are somewhere between 73 and 85 breweries in operation in Montana now. Most of them have tasting rooms and live music. I have been working, driving, working, driving, etc. steadily for the last 5 or 6 years in many of these establishments. It has been a boon to my music. At some point a few years ago, my old buddy Travis Yost basically challenged me to get a looper, to expand beyond the one person/one acoustic guitar/one microphone straight singer/songwriter model for solo performance. Well... I did. I have been making it happen with a hefty pedalboard full of effects including compressor, overdrive, chorus, phase shifter, boost, eq, digital delay and reverb, all routed through my looping pedal. Things got complicated. And spacy/spacious. It has been a fabulous creative trip for a while now. Whole show has expanded. Old songs have come back into the repertoire, rearranged, opened up. Most shows include at least one extended on-the-spot improvised soundscape at some point.

But, of course, before, or AS I was starting this expansion of creativity, around 2013....I decided to sit in the abandoned ballroom of The Pioneer Club, in Butte, MT, above Headframe Spirits, where I had been doing some shows, and have my friend Clark Grant record me playing a straight singer/songwriter set of new an old originals. This is Power Down Devices. I arrived in Butte early in the afternoon, Clark gained access to the dusty, second floor Uptown Butte space, and we loaded in and set up recording stuff. I went downstairs, played my gig, we went and grabbed a bite to eat, then I sat in a chair and played all the songs into a mic or two. We actually crashed in our sleeping bags on some old couches or rugs or whatever, got up the next day, got caffeinated, and had a listen to what we had done the night before. Did more takes of a few songs, packed up and left. This record is as straight as can be. Just good songs.

At some point in here, a couple of my friends in Dodgy Mountain Men, Josh Clinger and Jed Nussbaum, were forming a little bluegrassy/jammy acoustic side project and convinced me to come out of bass retirement to play some electric bass with them. Hardwood Heart was formed. Played 20 or 30 shows over a couple years. Between my family and solo gig schedule and their incessant roadwork with The Dodgies, we just couldn't find time to rehearse and do the occasional gig, and that project went the way of a million other fun, creative things over the years... sigh.

Meanwhile - I'd been writing more songs, of course. My friend Bethany Joyce, who you can hear on cello on this amazing one-off recording of my song "Friend of the Dead," mentioned that her man, Sean Burress, was learning how to play drums and would be interested in doing some recording... Sean and I hit it off really beautifully, and spent a year or more, getting together when possible (Sean is a genius guitar player, bass player, beat-maker, and plays a LOT of shows with a number of bands and projects) to rehears and record... We made a record's worth of music... and... never quite got it finished. maybe 8 or 10 songs in the can... waiting for final vocals, harmonies, editing, mixing etc. It may never come out... We called ourselves Lego Hundy, after the tiny plastic 100 dollar bill that my daughter's Lego people carry and exchange. Played a few shows with Drums and Guitar here in Missoula and in Helena... then petered out. The good news is Sean asked me to play electric guitar in his new Hip Hop/R&B/Experimental group, Brute Finesse, an that has been a blast since the end of 2017 or so.

I needed a record that illustrated my solo, looping, jamming show, that I'd been performing 75 or 100 shows for the last three or four years. Fooled around with a little digital recorder, finding a good place to put it for live recording, and ended up recording a whole bunch of shows from the summer of 2016 through say, January of 2017. Found some good performances, had my daughter make some great artwork, did the whole thing and ended up with LIVE.

Well... I can't believe you made it all the way down to here. Why not reward yourself by picking up Your Prescription.